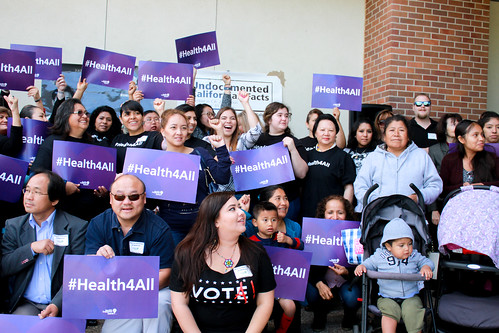 Last year, Arlette Flores went to her doctor’s Merced office because of an intense abdominal pain she believed was caused by gallstones. She was sent to an emergency room and told she needed surgery and that, after, she’d feel better in a couple of days.

But the surgery didn’t help and Flores said her pain was so intense, even strong medications such as morphine couldn’t relieve it. A week later, she was rushed to the University of California, San Francisco, where doctors finally were able to give her relief.

Flores believes the reason she couldn’t find care in Merced is because she is undocumented and lacks health insurance.

“As soon as I got there, in San Francisco, I was treated with respect and with dignity and that made me wonder, why is it that I’m worth more in San Francisco and not in Merced?” the 36-year-old mother of four said.

Flores was among dozens of residents who attended a rally in front of the Department of Public Health last week to demand greater access to health care for all residents regardless of legal status.

“Our voices can speak even though they think we don’t exist,” Flores told the crowd.

“What do we want?” she shouted.

“Health for all,” the group yelled back.

The rally was organized by the Prevention Action Team from the nonprofit group Building Healthy Communities in Merced to urge the Merced County Board of Supervisors to address the issue of greater access to health care, particularly for undocumented adults. It was held before the start of the Merced County Health Care Consortium meeting on April 28.

“I am here because I wanted to advocate because I know I am not the only one that has been mistreated like this,” Flores said.

The Prevention Action Team said it reached out to Hub Walsh, supervisor for the county’s District 2, to request a “study session” on health care eligibility for county residents.

Walsh told the Merced Sun-Star the issue of health coverage is very complex and the topic is discussed in professional departments.

Walsh attended the consortium meeting to learn more from a panel discussion that touched on services that can be obtained regardless of immigration status. As for the team’s request for a study session, he said he would be “more than willing to meet with them.”

The team said Walsh suggested its members attend the consortium meeting, a proposal the group said left them disappointed.

“Merced County’s undocumented residents already know what Merced has to offer and they know it is insufficient,” it said in a statement.

Merced is among a stretch of San Joaquin Valley counties with higher-than-normal percentages of uninsured residents. Some 15 percent of residents in Merced County lacked health coverage in 2015, according to Enroll America, a national health care enrollment coalition. California’s average is 8.6 percent, according to Covered California, and the national average is 9 percent.

Fresno, Madera, Kings and Kern counties also had uninsured rates of 15 percent, according to Enroll America. Tulare County’s rate was 16 percent, and Stanislaus’ rate was 13 percent.

According to the nonpartisan Public Policy Institute of California, approximately 140,500 residents of the San Joaquin Valley are undocumented immigrants.

Crissy Gallardo, leader of the Prevention Action Team, said Merced is among the 10 percent of California counties that do not provide health care options for undocumented residents.

Flores said that while there are local clinics that try to help low-income and undocumented residents, such services are not enough.

In her case, she said, doctors were slow to run a CT scan to pinpoint the cause of her pain. It wasn’t until they did so that they learned she had a perforated intestine and that an infection had spread through her body.

“They said, ‘We cannot do anything for you, so we’re going to look for another hospital. Let’s see who takes you,’ ” Flores said.

After a doctor at UC San Francisco finally agreed to treat her, she was warned to expect the worst. “I just prayed,” she said.

Read it on the Sun Star:

Message to Merced City Council – My Voice MattersJerome Rasberry Jr: A plan to get youth involved in confronting gang violence