Half of immigrants in state illegally could be eligible for Medi-Cal expansion, study finds 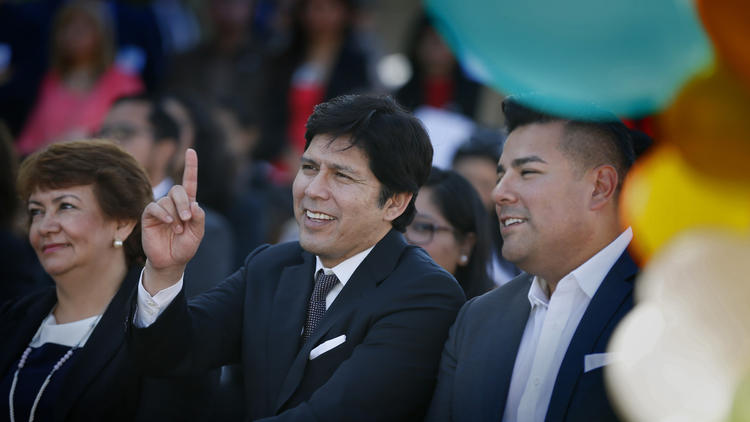 California Senate President Pro Tempore Kevin de León, center, with Sen. Ricardo Lara at a news conference celebrating the expansion of healthcare to children in the country illegally. At left is Arabella Aguirre, a Guatemala-born mother of three undocumented children who will benefit from the signing of the law. (Don Bartletti / Los Angeles Times)

Half of Californians in the country illegally would be eligible for the state’s healthcare program for the poor if it were expanded under a proposal by legislators, a new report finds.

Some California politicians are pushing to open up the $91-billion Medi-Cal program to people here illegally, since such immigrants are not allowed to sign up for insurance underObamacare.

An analysis released Monday by the Public Policy Institute of California quantified just how much of a dent in the state’s uninsured population such a policy change could make.

The study found that of the estimated 2.6 million unauthorized immigrants in California, 51% make so little money they would qualify for Medi-Cal. To sign up for Medi-Cal, a single person or a couple must have an annual income of less than $16,243 and $21,984, respectively.

The report also found that nearly half a million people would be eligible for Medi-Cal in Los Angeles County alone. That’s not just because the county is home to the state’s biggest population of those here illegally, but also because those in L.A. County are more likely to live in poverty, according to institute researchers.

The study is the first to evaluate the size and incomes of California’s undocumented immigrant population at a county level. Shannon McConville, study author and research associate at the institute, said that with so many recent as well as proposed changes to California’s health policies, she and her colleagues wanted to assess how each county would be affected.

Over the last year, California politicians have taken steps to offer coverage to people who immigrated here illegally.

Last month, Gov. Jerry Brown signed a law that for the first time provides healthcare to children in the country illegally, making California the largest state to do so. In addition, the number of counties that have committed to giving low-cost, government-run medical care to such residents jumped from 11 to 48 this year. Now only 10 counties provide nothing.

See the most-read stories this hour >>

State Sen. Ricardo Lara (D-Bell Gardens) is continuing to push for legislation that would allow all unauthorized immigrants to sign up for Medi-Cal and those with higher incomes to buy insurance through the state’s Obamacare exchange. A bill he offered this year failed to get enough support, so it was limited to children.

“We cannot wait for the federal government,” Lara said at a news conference in Los Angeles late last month. “We have to demonstrate that California leads.”

Currently, people in the country illegally make up roughly half of the estimated 3 million Californians who remain uninsured.

An early version of Lara’s bill was priced at more than $1 billion.

Will nation follow California on healthcare for immigrants here illegally?

That’s why his current plan would allow those with higher incomes to buy insurance through the state exchange, Covered California, but would not offer government subsidies. Under the Affordable Care Act, people who buy health insurance through the exchanges are typically offered financial assistance to help bring down costs.

McConville and her colleagues found that the 48% of Californians who would be able to buy insurance through the exchanges would probably find the health plans too expensive without subsidies and would be unlikely to sign up. However, McConville said opening the exchanges could build a foundation for later legislation to offer such help.

“A lot of the time policy-making is piecemeal,” she said.

Though California is moving forward with these policy changes faster than any other state, the topic remains highly controversial in the state.

A recent USC Dornsife/Los Angeles Times poll found that though close to half of state voters believed immigrants here illegally should be eligible to receive free or low-cost health insurance through Medi-Cal or a similar program, a statistically equivalent 47% said they opposed such policies.

Claudia Corchado: A path to peace of mindJoseph Diaz: All our families were immigrants once